Wing Chun is the Nucleus of Jeet Kune Do 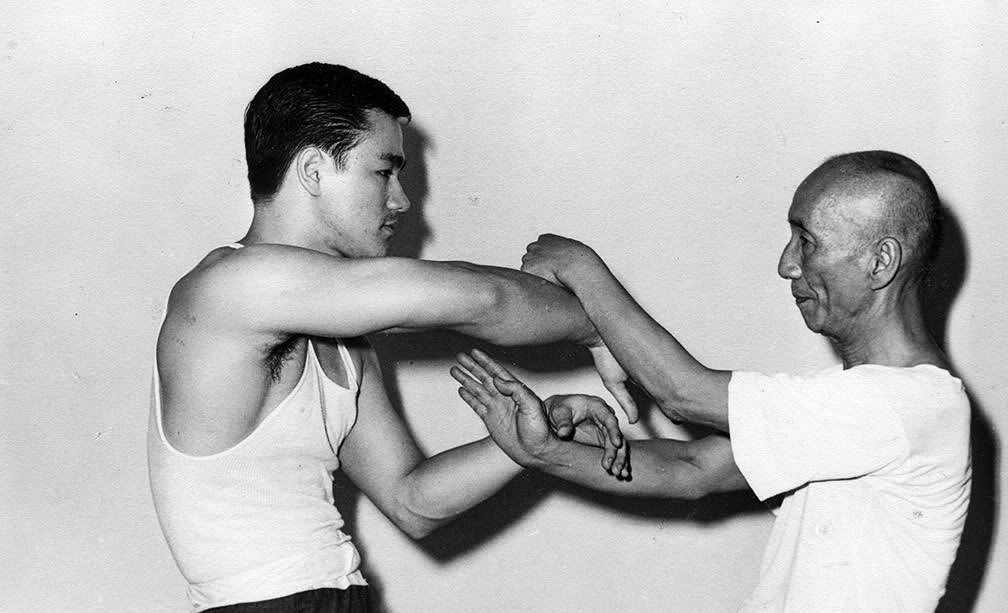 As the title indicates “Wing Chun is the Nucleus of Jeet Kune Do”.  The definition of Nucleus is,  “the central and most important part of an object, movement, or group, forming the basis for its activity and growth.”  Wing Chun is the Engine that JKD is built around.  As Guro Dan Inosanto once said, “Jeet Kune Do is Chi-Sao at long range”.

So to truly understand Jeet Kune Do, you must have an in depth knowledge of Wing Chun.  I don’t just mean trapping techniques, but structure, alignment, centerline theory, and the attribute of sensitivity gained from Chi-Sao.  The structure and alignment is gained from studying and practicing the forms, like Siu Nim Tao.  Now you don’t fight with the form.  The form is there to teach you co-ordination of body and mind, of proper posture, of proper structure.  Structure means the correct body mechanics, coordination, and connection between muscles, tendons, and bones.

The forms also train the attributes of concentration, focus, and the ability to be still and empty the mind of chitter chatter.  If you do not train to be still, how will you do it during the chaos of a fight?  Often times people misread Bruce Lee, when he says you throw away the forms, he means only after you have gained the benefits from them.  You can never become formless without first having a form.

Wing Chun is the Nucleus of Jeet Kune Do from two aspects.  First it’s core ideas and concepts are the engine that Jeet Kune Do is built around.  The ideas of “Jeet” or Interception, Broken Rhythm, and Adaptability are core principles of Wing Chun.  They all require the attribute of sensitivity.  You need to be able to feel your opponent’s movement and act accordingly.  On higher levels you can intercept your opponent on thought.  You can feel your opponent thinking, and without hesitation your body reacts and hits all by itself.  Chi Sao is not about how many techniques you know, it is all about how well you can feel or read your opponent and intercept their thoughts and movements.

There are 5 ranges of combat.  From long to short range, we can classify them as

Trapping or Wing Chun occurs between the Punching Range and the Standing Grappling Range.  Bruce Lee understood that Wing Chun occurs in the middle of Boxing and Wrestling.  Boxing-Trapping-Wrestling are so close, they are within each others range.  The moves happen so fast that we need to adjust the Wing Chun structures to adapt immediately.

Most fights start from the pushing or punching range, a chest bump, or some foul language, or someone gets blindsided with a punch or tackle.  This type of fight you just react, and you go straight into Fight or Flight mode.

Another kind of a fight is a match or a duel.

In JKD philosophy there are 3 stages of the duel.

Stage one is all about Entering by bridging the gap, or closing the distance through the kicking and punching range.  JKD incorporates French Savate for kicking and Western Boxing for punching.  Either you initiate the entry this is called a Primary Attack.  Or your opponent initiates the attack; this is called a Secondary Attack.  When your opponent attacks they give you an opportunity to attack their attack by intercepting or destroying the blow.  Now we steal this moment of pain, and enter into the Rally Stage of the fight.

At this point of the fight, you can either end the fight or you can get countered.  So once you enter after steeling a beat in time by causing pain, you now have about 3 beats in time to finish or be countered.  This is where the “3 Hands Deep” principle comes in.  It is said that Bruce Lee’s first 3 hands were so fast, that you never got a chance to see what his 4 and 5’th Wing Chun hand looked like.  So there might have been people who had better technical Wing Chun and could win on the 4 or the 5’th hand, but what does that matter if you have already been blown away on the first 3.

We want to win the battle of Timing, Angle, and Distance against any style or system.  The two styles that border Wing Chun are Boxing and Wrestling.  So we need to know the boxer and wrestler’s Timing, Angle or line of attack, and their ability to close the Distance or apply forward pressure.  A boxer can parry and hit you back right a way, or they can cover and hit, or they can hit while you are attacking.  Especially be weary of the quick jab and the lead hand hooking line, and the body hook lines of attack.  The wrestler can also neck clinch, body clinch, or shoot for a takedown in a flash of a second.  An MMA fighter that is versed in boxing and wrestling can counter with punching and shooting in combination.  The thing to remember is a good wrestler will not just shoot for a takedown once, they will continue in combination if the first one fails or is blocked.  It is their idea of Shoot-Re Shoot.  If you went up against a fellow Wing Chun practitioner it still comes down to the first 3 hands, or 3 beats in time.

You can be countered at 3 different times.  If the opponent is particularly aware and highly sensitive, they can get the jump and intercept you with their counter move when you are initiating the start of your movement.  You can also be countered during your movement or after your movement has been completed.

So if we understand the times we can be countered.  We now need to look at the lines of attack.  The angle of attack the particular style or system chooses to employ.  This requires study of the style.  You need to immerse your self with boxers and wrestlers, and learn their game.  So you can learn their line of attacks.  Having a student try to mimic a boxer or a wrestler, will not give you the real pressure.  We need to also have sensitivity towards how quickly a wrestler changes levels or moves forward.  We need to develop a sensitivity to how quickly the boxer parry’s and counters, or uses footwork and head movement to evade your blows.  So if we understand the opponent’s style and their timing, angle, and distance, we can then start to go back and adapt Chi-Sao, Wing Chun, or Tai-Chi structures to the Boxer and Wrestler.

The Rally is also where the attribute of Sensitivity comes into play.  The concept of “Sight Beyond Sight”, is the ability to instantly feel and apply pressure without the delay of thought.  Sensitivity allows you to be like water, it allows you to feel and adapt to your opponents structure and pressure.  Your limbs can’t go back to the general, the mind, every time for orders, this takes too long.  You must train your forces, your limbs to attack on their own, without thought.  There is no time for thought, the rally happens in a flash of a second.  You don’t hit, it hits all by itself.

Countless hours of chi-sao are needed for a fraction of a second during the Rally Stage of the fight.  Trying to trap without Chi-Sao is like doing Brazilian Jiu-Jitsu without rolling, boxing without sparring, and wrestling without live grappling.  It doesn’t make sense, because we need to train the limbs to adapt to Timing, angle and distance out of live movement.  This skill takes time to develop.  You must learn to eat the bitter pill in training.  Also energy or sensitivity training can’t be learned from video or in large groups.  You need to get it passed to you one on one from your teacher.  The teacher knows how to lead the student by progressively guiding their energy, or their ability to adapt to the scenario, step by step.  The feeding hand is very important.  Sifu Ben Der, would lead me with his minds intent.  So I could learn to read when he was thinking.  This listening skill, is highly important when we talk about energy and sensitivity.

It is during the Rally and in the trapping range where we turn on the animalistic attribute of Killer Instinct.  This is the stage of the fight when you have to go for it, turn on the Emotional Content, and go for the kill.  Now Killer Instinct is like a Chained Tiger.  Once it gets going it needs to be controlled, you need to yank on the chain of the tiger, otherwise you can easily waste all of your energy or lose control of yourself in the heat of the moment and make a mistake.  So your mind has to be completely present, you need to be 100% present with all of your energy.  So to be aware of ones energy, how much gas is in the tank, requires a calm, cool, and collected state of mind.  This is why you have to be empty, there can be no thought, no thinking, just doing.  You don’t do it, it does it all by itself.

The 3rd and final Stage of the Fight is the Follow-up and the Finish.  This is totally up to the practitioner, and degree of force necessary should be dialed up and down depending upon the force appropriate for the situation.  For example if you have a drunk uncle, you can use joint locks to escort him out of the situation.  In more heated exchanges you might need to strike the opponent to stop them.  In extreme life and death situations, you might need to draw a blade and terminate the opponent.

Remember the study of Martial Arts is a Scientific Experiential Process.  It is a process of self discovery, a process of trial and error, a process of problem solving, a process of progression and growth.  So it is all about the Process that you take to develop yourself and discover the cause of your own ignorance.  We should not get stuck with names and labels; they will limit your growth.  I think all martial artists, especially Wing Chun and JKD practitioners should spend more time together, train together, grow together, and come together as Branches of the same tree.